Larry Bell is one of the most noteworthy representatives of American abstract art in the postwar period, with a career that has spanned four decades, earning him an audience in all the major art centers of the world.  His works, largely experimental and always groundbreaking, involve the manipulation of his preferred medium—light on surface, and their dimensionally spatial relationship—into dazzling sculptures, collages, and installations. Biography 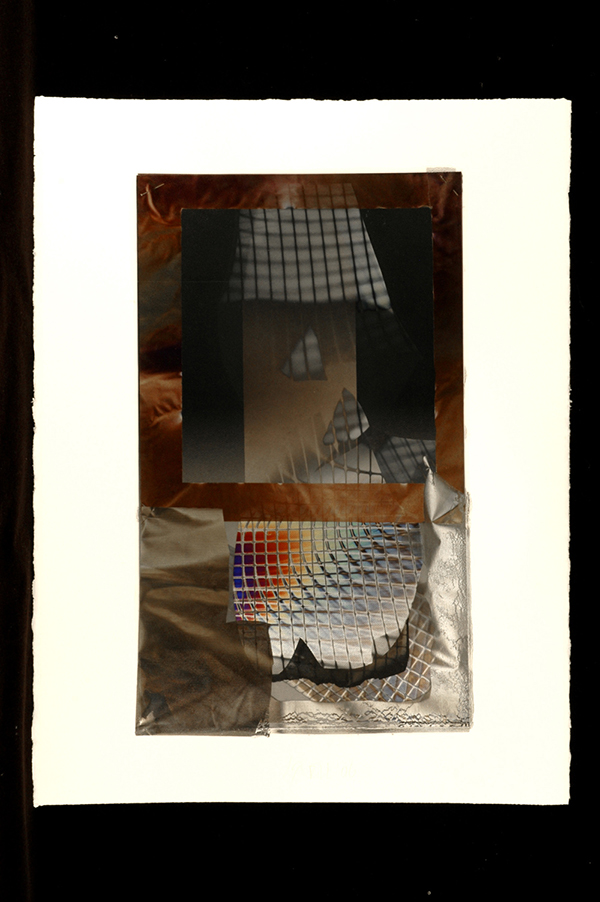 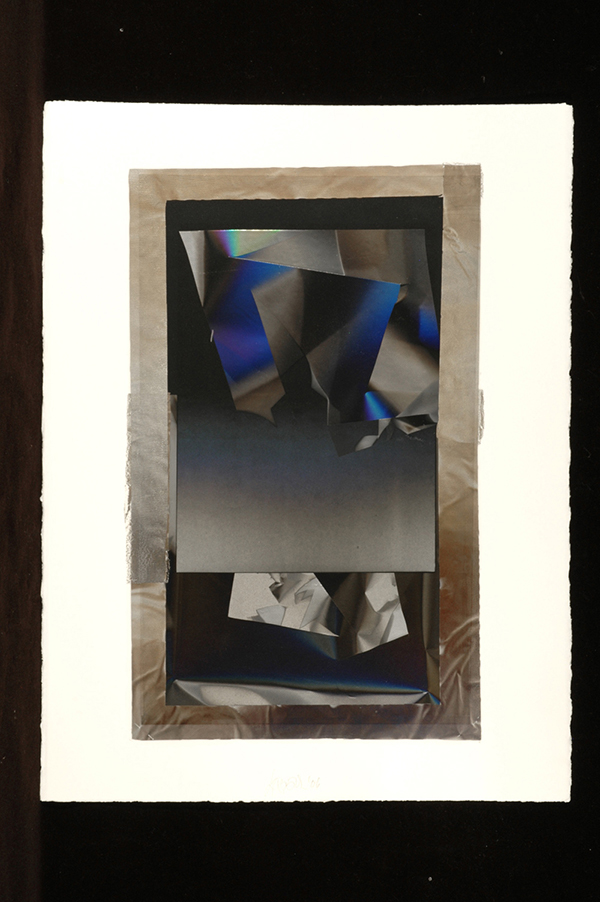 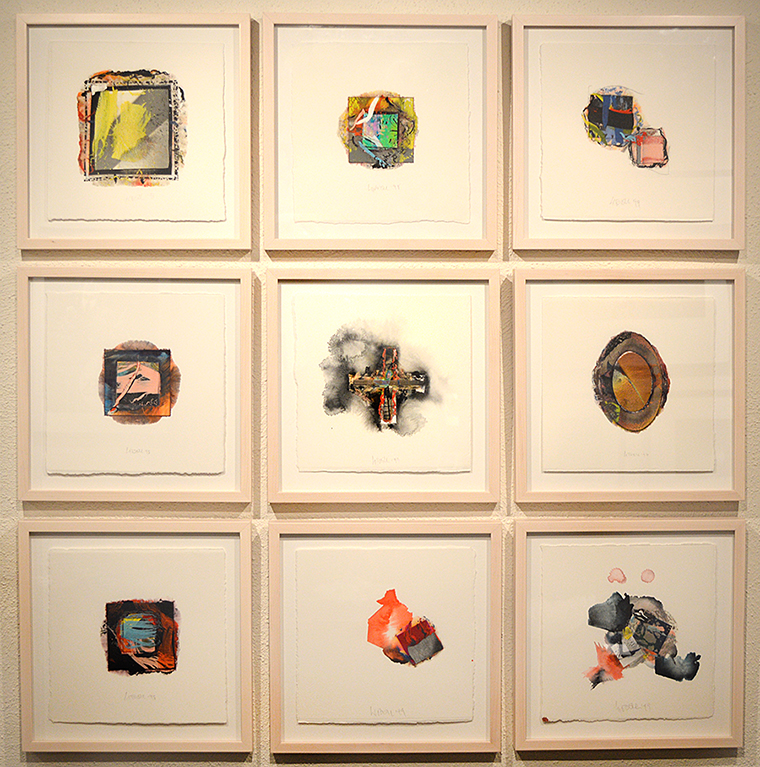 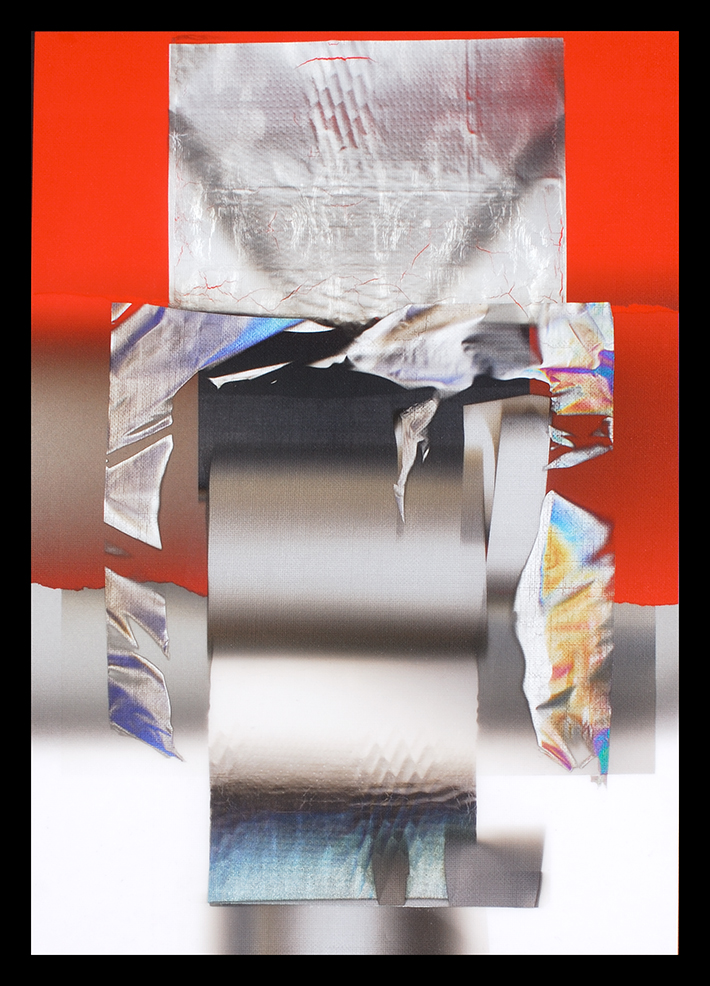 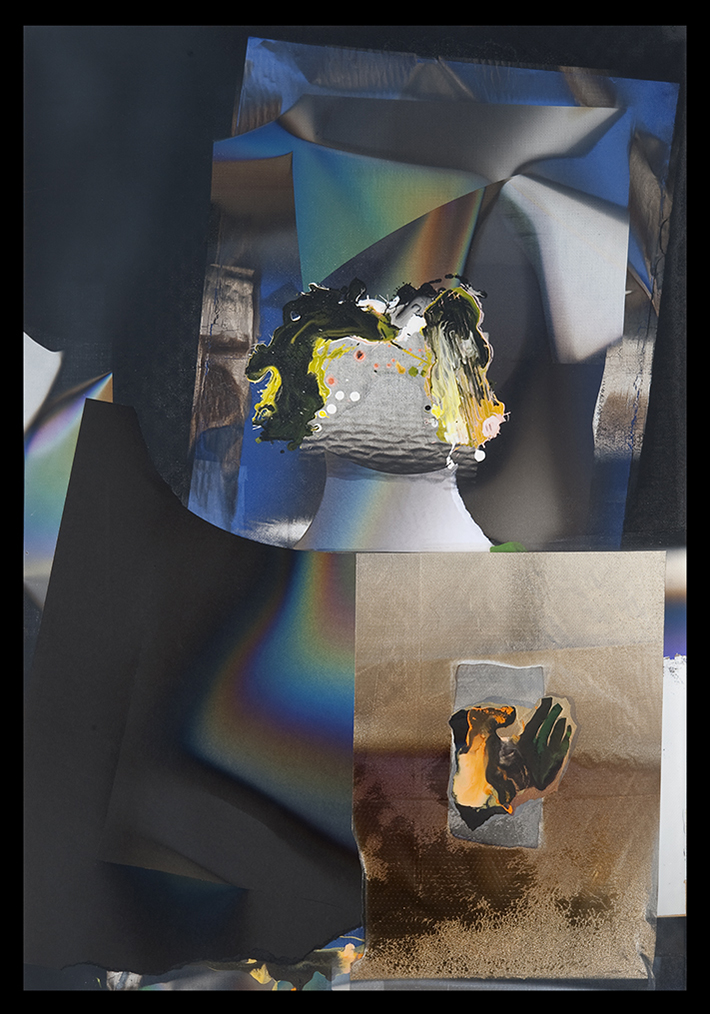 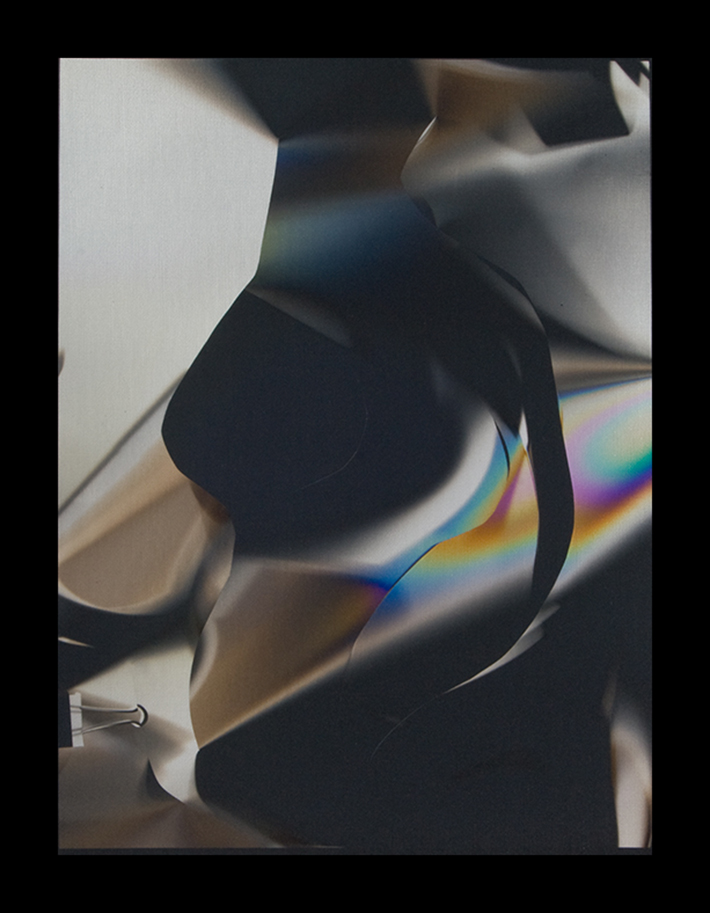 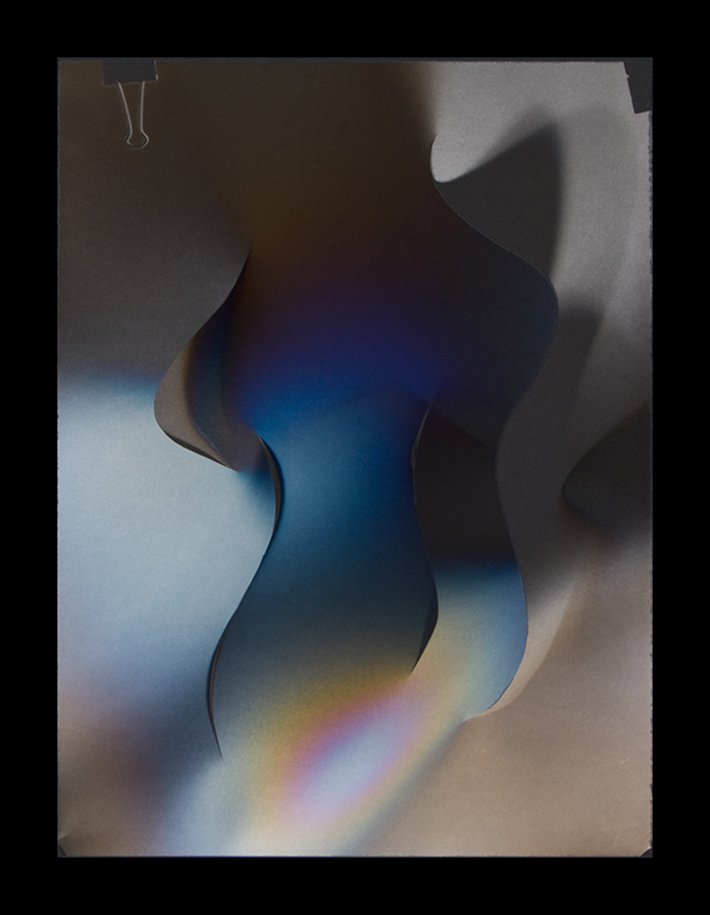 There are 9 works for sale and the Tableau on exhibit.   Read Larry’s essay about how the series came to be. 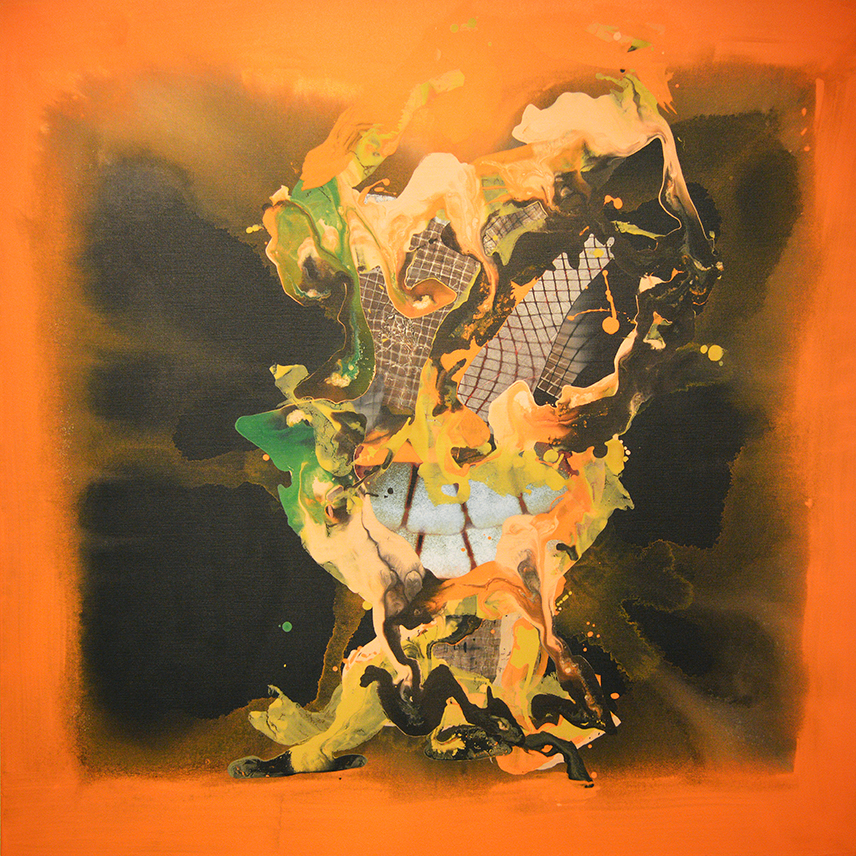 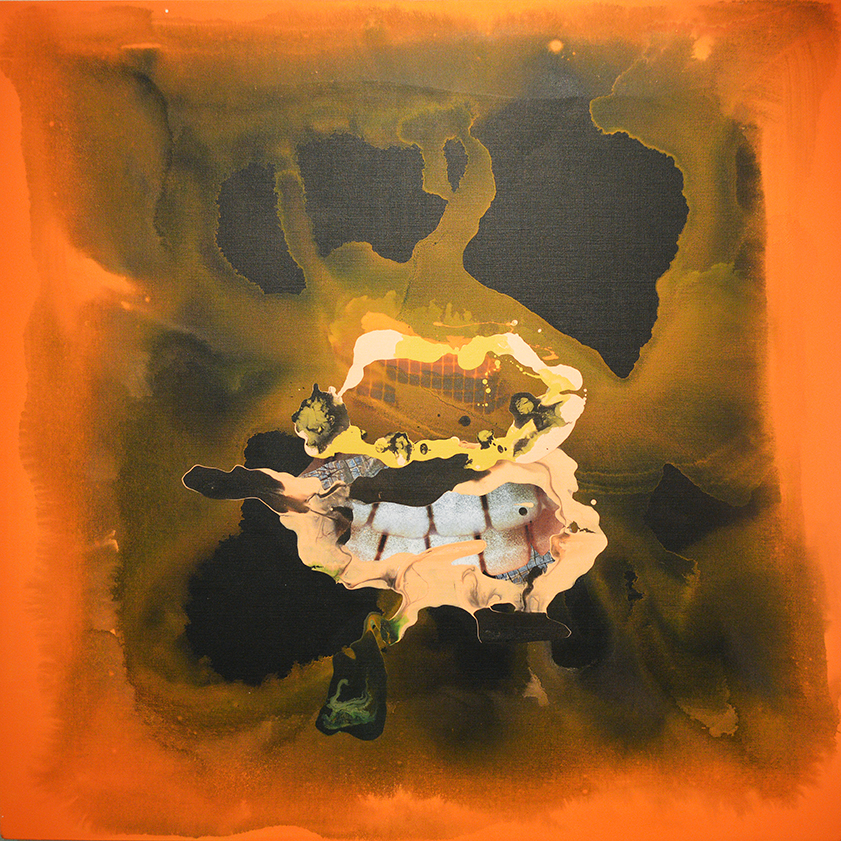 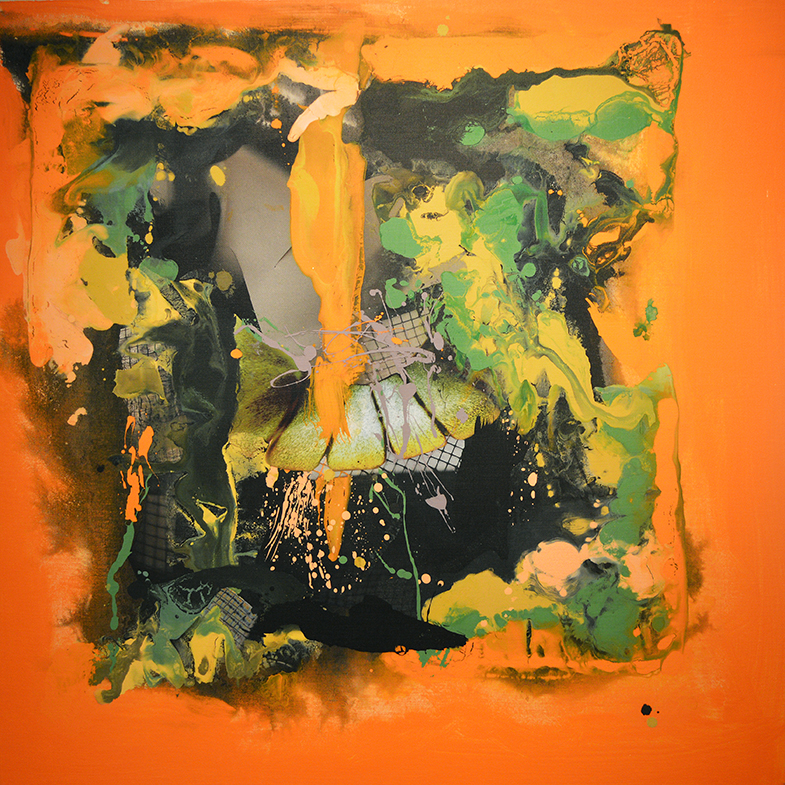 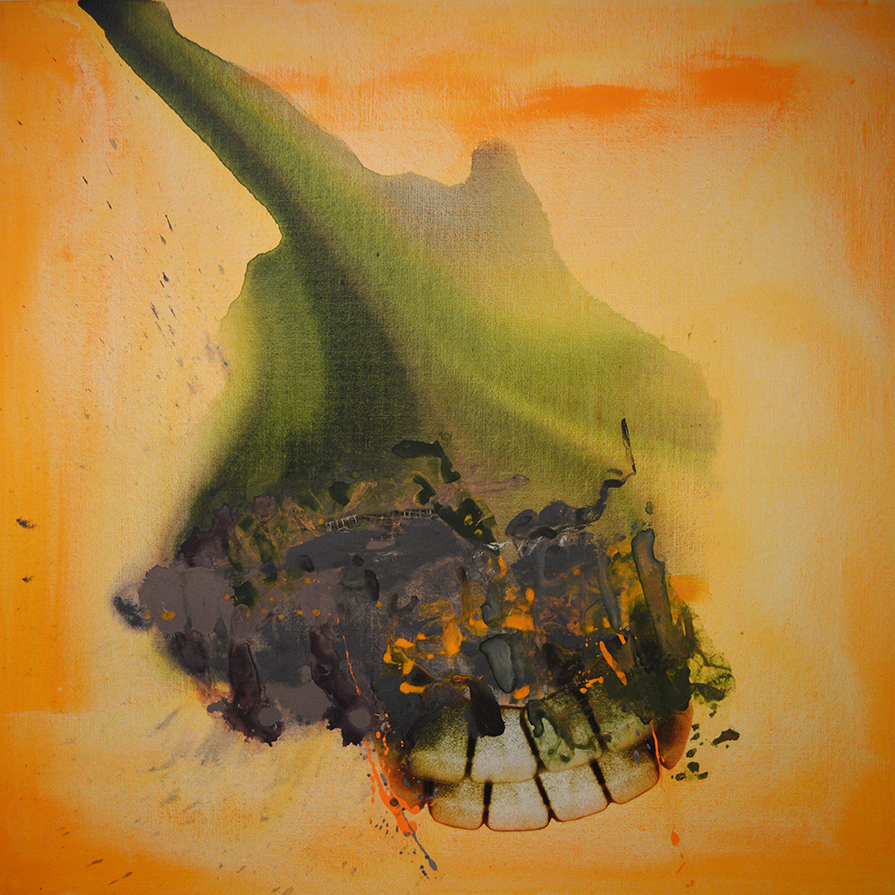 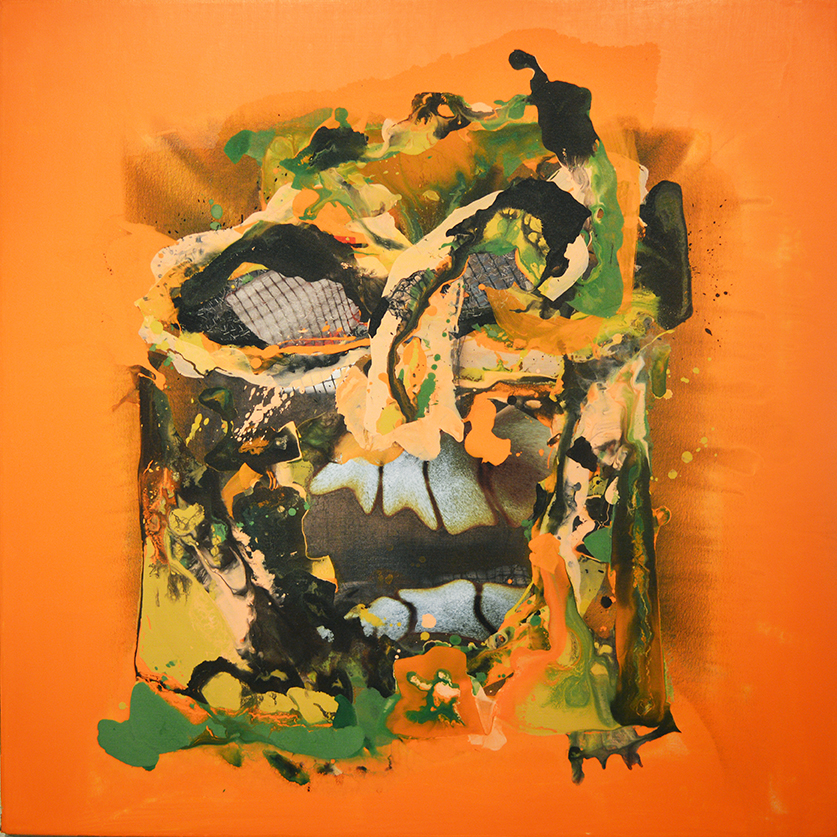 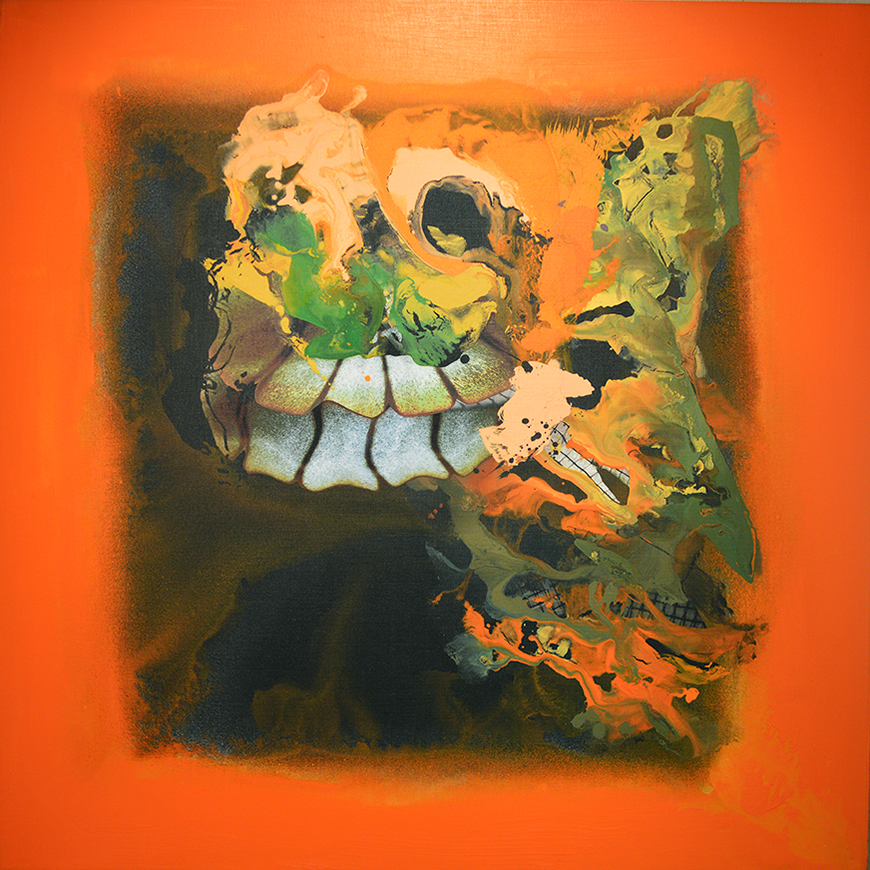 “On September 11, 2001, Janet Webb and I were on our way to Washington DC for a reception given at the State Department by Colin Powell for the art in embassies program. We were aware of the incident of a single plane crashing into one of the twin towers in NY. When we drove into the pass south of town we heard on the radio that the second tower had been hit and all airports were grounded. We turned around and headed back to Talpa where we watched the replays of the incidents and the buildings collapsing.

Every day for five days all channels were focused on the tragic event. For five days I watched the surreal images of the planes flying into the buildings and the giant fireballs and black smoke and the buildings crumbling into clouds of dust. Green acrid air and the ruins of the steel structures that held up the buildings were constantly being shown.

Before the events I had started a new series of images on canvas destined to become collage with a tinted canvas supporting the imagery. The images I was developing were totally different than what came out after the five days of witnessing the replays.

I went back to work on the sixth day after the event.
The staining of the canvas became the color of the fireballs and the fragments of the papers and collage elements became the strange imagery that is seen in the works. The acrid greenish color of the dust and detritus in the air became part of the imagery also. My work became totally driven by the imagery and emotion of the incident and was totally emotional and intuitive.

I like to work fast; in the 30 days after the event I had made about 30 canvases with this kind of imagery on it. I did a show of this work at the Kiyo Higashi Gallery in Los Angeles; installed with another improvisational sculpture I called “The Time Machine”. We covered the windows of the gallery with a thin foam core board, which transmitted a gray greenish light.

The Time Machine compresses the reflected and transmitted light so a reflected image seemed to superimpose on whatever was transmitted through the glass of the sculpture. To me it suggests the compression of the materials of the building on the casualties inside the structures as if the people had become parts of a flat collage.

I have only shown this combination once before. In fact I do not like grotesque imagery, in a complex way, I like these works only because they are so totally honest. The only title I could think of for these odd images was Teeth in Orange Juice”.
Back to Top Larry Bell emerged onto the Southern California art scene in 1959, and has since remained at the forefront of the American abstract art movement. Though his works all rest upon a foundation of light, surface, space, and energy, he continually reinvents those elemental interactions, transforming his art with the spontaneity and intuitive improvisation for which he is renowned.

Bell’s earliest works demonstrate the influence of such Abstract Expressionists as Willem de Kooning, but his attention was quickly redirected from painted canvas to experimentation with mirrors, wood, and glass from which he would construct angular, mixed material sculptures. The panels played with reflectivity and refractivity, lending an aesthetically appealing challenge to discern the distinct from the ambiguous.

By the mid-1960s, Bell had expanded his work with glass cube sculptures to include surfacing finishes that altered the manner in which light traveled, rendering glass that was lit, as if from within, with translucent color in random patterns. His success with the process led to further exploration of surficial effects, achieved with the vaporization of metals in a vacuum chamber, which would then settle upon glass panels placed inside the chamber. The acclaim for Bell’s revolutionary methods secured him glass wall installation commissions for both the Museum of Modern Art and The Tate Gallery.

In the late 1970s, Bell undertook an exploration of the vaporization effects upon paper. Vapor Drawings, the resulting pieces, earned the artist such widespread acclaim that they remain in his body of works to this day. Bell’s most recent Mirage series uses films and Mylar in lieu of paper, and is often incorporated into his iconic mixed media collage pieces.

Larry Bell maintains residences and studios in Taos, New Mexico, where the vacuum chamber is located, and Los Angeles, California. In addition to the Museum of Modern Art, Bell is in the collections of the Guggenheim Museum, the Smithsonian American Art Museum, the San Francisco Museum of Modern Art, the Los Angeles County Museum of Art, the Whitney Museum of American Art, the Albright-Knox Gallery in Buffalo, and the Massachusetts Institute of Technology. International collections include Museum Ludwig in Cologne, the Stedelijk Museum in Amsterdam, and the Musee d’Art Contemporain in Paris. He was the recipient of the New Mexico Governor’s Award for Excellence and Achievement in the Arts in 1990, and continues to receive prestigious invitations for solo exhibitions and installations. Bell has most recently been invited by the Chinati Foundation to present a 40-year glass sculpture retrospective showing in Marfa, Texas, through September, 2015.
Back to top